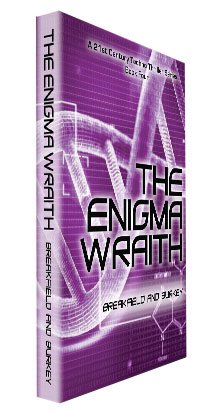 What we were thinking: The Enigma Wraith #4 of the Enigma Book Series-

By BreakfieldandBurkey March 17, 2020 No Comments

One of our scenarios in this story is exploring what happens when business operations teams have reduced headcount to below minimums at the same time, becoming aware they may have chosen poorly.

Our Irish lead, also a bit of a smart aleck when provoked by a manager he doesn’t respect, John C, has a remarkable record of fixing nearly anything. He is a bit baffled with the  interaction from his bank system administrator access as he investigates why all the bank resources disappeared.

Can a hacker penetrate a firewall and cause havoc? Do you have a story about a breached network from someone you do business with? You can write and tell us… we will of course be tempted to weave it into another story in the series. And yes we will change the names to guard against embarrassment…

With a resigned fatalistic posture, the Data Center Manager stood rigidly at attention and admitted, “Ladies and gentlemen, without going into all the gory details, we have no backups to restore that will give us our institution back. Everything is zero. There is nothing going forward and nothing to go back to. The electronic assassination of this bank is total.”

The statement echoed through everyone’s mind as it produced the same sick feeling in all of them.

O’Sullivan tersely asked, “Are you telling me that we have no system backups, no history, no off-site storage of tapes, and absolutely no telemetry in any other location or media type to restore from?”

The Data Center Manager took a few seconds to bring his anger under control before he replied, “That is correct. The off-site storage of our data backups was terminated due to budget constraints late last year, and we were instructed to simply use secure on-site storage. I remember the instruction quite vividly since it was not long after that the Vice President or VP bonuses were announced. The banks’ cost reduction schemes had generated unexpected profits.

“Oh, yes, and that’s when it was decided to terminate the backup administrator since we didn’t need that position based on everything being kept on premise and on-line for a quick restore. As it turns out the easy restore access also meant easy destruction of this bank’s backups.”

The irony of the bonus payout after eliminating the backup/restore personnel and eliminating the off-site storage of the backups was not lost on the VPs in the room who shifted very uncomfortably in their chairs.

John C let all the information sink in and then went to the computer that was projecting the banks’ account status and began to login with his credentials only to have his login sequence interrupted with the screen image;

John C bristled with some indignity and hit the enter key that promptly displayed the banks’ restored inventory of debits and credits, with a smiley face after the screen display. With everyone’s attention now focused on the projected screen image, John C hit the enter key again and revealed the following screen image:

Thank you for doing business with our banking corporation. Would you like to take a satisfaction survey for a chance to win a €10 gift card?