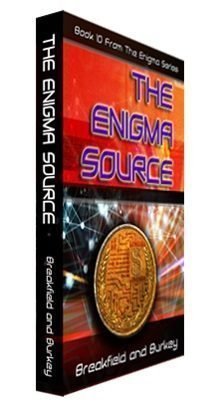 What we were thinking: The Enigma Source – #10 of the Enigma Book Series-

By BreakfieldandBurkey March 10, 2020 No Comments

Can you ever outrun your past?

For us, The Enigma Source is a way to look at the world situations from multiple viewpoints. In order to do this from the multiple perspectives we wanted to leverage one of our favorite technologists. Problem is that was her past not her present, at least that is want she thought.

Her new husband Andy was as friendly as welcoming as anyone in the south, until he feels his family is threatened. This is a man not to be trifled with on his property. You’ll need to read the story to find out how they meet this situation head on and if they survive.

You can pre-order this currently from our website enigmaseries.com. This story will keep you on the edge all the way until the end. We look forward to your comments.

Su Lin studied the large hound as she approached and remarked, “I must agree with Andy’s assessment of you, Wrinkles. If you were any more laid back, you would be constantly slipping into a coma. You must have played pretty hard today, to not even get up to begin pestering for snacks.”

Su Lin stopped just outside the door and looked around the property one more time, hoping to alleviate her unsettled feelings. But the well-kept Georgia farm with its large welcoming home was perfectly in place. They had recently repainted in brick red with white trim, which now yielded nothing out of the ordinary and a certain quaint elegance without pretention. She shrugged her shoulders to lose the cloud of doubt she felt and went inside. As she closed the screen door, it flashed through her mind that locking the door would be a good idea even though they never did. Andy always wanted folks to be able to drop in. He’d insisted you couldn’t be neighborly if the door was locked.

Su Lin paused at the mirror in the mud room, verifying that her hair was in place, and no dirt was apparent on her ivory skin. Even though she’d had servants for the majority of her adult life, she enjoyed her work with the animals. However, she decidedly wasn’t in the mood to discuss how southern folks in the country always left the doors unlocked, as she went on in to check on Andy to see if he was ready for dinner.

Andy’s office was a cross between a high tech server room, operations area, office area, and something of an electrical power drain on the grid. If he wasn’t wearing his headset while talking to one of his many customers, or signed into a high tech webinar, he was building something for testing or trialing in his operational headquarters known as the Rock-n-Roll Domain. It wasn’t uncommon for Su Lin to check on him, only to find him totally absorbed in some new technical project with some rock-n-roll music playing at varying decibels in the background.

As she wandered closer to Andy, she noted that his white hair was a bit long, but nice with waves, offsetting his broad shoulders which suited his big hands. When he hugged her close it was like being wrapped in a cocoon of gentle protection. He was by all standards a big man, just shy of two meters and nearly 90 kilos. She smiled with fondness, until she drew closer and noted with dismay all the high-caloric junk food packages strewn around, mostly empty.

She immediately fussed, “Andrew! We’ve talked about this! Your heart attack was a wakeup call for your poor eating habits! The doctor said if we cut back on all the processed foods infused with sodium and sugar, you could lead a normal life. Honey, you promised!”

Andy sheepishly offered, “Aw, sweetheart, I have turned over a new leaf. You notice that I no longer have that big salt block used for cattle on the table at suppertime. Now, doesn’t that count for something? Besides, all the healthy cooking you have been doing should make up for some of the small splurges I have now and again.”

Su Lin retorted, “That’s because I feed all the fat trimmings to Wrinkles, who by all accounts likes your new diet. And say, what’s wrong with him today? Usually he is all over me when I come back in the afternoon from the pens. Have you been feeding him your favorite concoction of cheese puffs dipped in melted fudge ice cream again?”

Andy rather soberly remarked, “Nope! Not since that last time when we had to clean up after his bazooka-barfing-from-both-ends episode. Not me, ma’am.”

Before she could admonish him further, she heard something in the front room area and cast a quizzical look to Andy before she went to investigate. When she walked into the front room, she saw a Chinese man, with the bearing of a military type, complete with his short cropped black hair and sinewy arms, sitting way too comfortably in one of the over-sized leather chairs, casually waiting.

Su Lin didn’t recognize the man, only the type, and she immediately disliked him. Trying to keep the alarm out of her voice, she called to Andy without taking her eyes off of the stranger. He was neither menacing nor friendly in his presentation to her, but he said nothing.

Andy barged into the room and stopped short upon seeing the stranger. He sized up the situation quickly and demanded, “Who the hell are you, and what the hell are you doing here?”

Andy, being ex-military police, always carried his 1911 Colt 45 in a holster at the small of his back and quickly reached for it. At almost the same time, he felt two cold weapons on either side of his neck. Then some very cautious, practiced hands carefully confiscated his weapon. Andy froze but still rotated his eyes from one side to the other to take in the two Chinese enforcer types holding guns at his neck.

Once the disarming process was completed, the seated man offered, “Ah, Colonel Ling Po, how nice to see you again. It’s been a long time. Apologies for the surveillance you apparently noticed and the intrusion, but you have been extremely difficult to find.

“Please, don’t worry about the enormous dog out front; he is merely sedated. I didn’t want to risk an unpleasant encounter with him while we…, um… talked.”

Andy, totally confused as well as mad, bellowed, “No one barges into my farm house and pulls a gun on us. Worse, I promise, when the uninvited stranger makes a bunch of fool-ass comments about Su Lin! You boneheads have come to the wrong place, so git out!”